I received a copy of the marriage contract between Johan Benjamin Schiller and Marguerite Hebert. The contract document was sent to me by Claude Kaufholt-Couture, the Director of the Association of Families With Germanic Origins of Quebec.

The contract was executed on July 14, 1783 at the Notary, Antoine Robin. However, it was recorded in his office on 11th September 1783.

The document was in hand written "old" French and quite difficult to read. However, with the help of my daughter-in-law (Manon Schiller) who is from Nice, France, we were able to pretty well make out the French writing and then translate it to English.
...Robert Pierre Schiller

" In front of the Notary, Kingdom of Canada and Province of Quebec, residing in St Francois Le Long Du Lac St Pierre and here under named and undersigned , were present: Jean Benjamin Schailler, Master Surgeon, born in Koenigsberg in Prussia, aged 26 years, of legal age and master of his own rights, stipulating and accepting legally on the one part; and on the other part Sir Pierre Heber resident in Yamaska and Dame Marguerite Derosier his spouse stipulating and accepting on this part for Marguerite Heber their daughter 19 years old.

On the other part, which parties in his and presence and the consecration of their parents and friends, for those assembled and others known on the part of said future spouses. That is to say:

Sir Jean Pally, his friend and on behalf of the future wife, Sir Pierre Heber, Dame Marguerite Derosier, her parents, Miss Basille Heber, Miss Isabelle Heber, Sir Antoine Heber brothers and sisters, Jacques Rocques - have willingly made between them the following treaty, agreement and convention of marriage as follows:

It is to be known that said Sir Jean Benjamin Scheiler and Miss Marguerite Heber have promised and promise to be married according to the laws of the church, probably ___________. This as soon as possible, however when one ask the other. To be as was said, the future spouses. one and only community, in all chattels, acquisitions and possessions and unploughed lands, that they will acquire during their marriage. Thus according to the common laws of Paris, followed up to now in this province, the future said spouses thus renouncing any laws or customs to the contrary. However, the said future spouses will not be held accountable for any debt or mortgage contracted by one or the other before the ceremony of marriage. If there is any debt, it will be paid and acquitted on the possessions of the responsible party without compromising the possessions of the other party whatsoever.

In favor of the future marriage, the bride will bring: a feather bed, a pair of bed sheets, a cow, a ewe, an 18 month old sow, a straw mattress, 4 pewter plates, 2 stoneware plates, 6 spoons, 6 forks, 20 flour mill measures or as the field of Mr. Heber will produce, a cook pot, a pewter plate and lid.

At the dissolution of the said future community by death or otherwise, it will be in agreement with the law for the future bride to accept or renounce it, and she will be allowed to take all that she will have contributed, all she will have inherited by succession or donation, legal or otherwise. All above rights and endowments, stipulated advantages without being linked to a debt, unless she is obliged to pay debt under the law.

And for the good friendship that the future spouses have for each other, they have donated to each other mutual and reciprocal enjoyment of their belongings, thus accepting to use and enjoy during their lives, all, without having to do an inventory, as long as, when they are deceased, they are not survived by any child living or to be born.

The parties have executed this contract legally in the presence of the Attorney-General, the bearer of which has all legal power. Legal document written and executed at Yamaska in the home of Sir Pierre Heber in the presence of Sir Jacques Rocques, Master Surgeon and Jean Pally Merchant, required witnesses living in Yamaska, that, with the other parties have signed in front of us or have placed, after reading the document, their ordinary mark. And those who have declared knowledge of the agreement have signed or put their ordinary mark after reading of the contract was made to them.

Mark of
ANTOINE HEBERT In our presence in our office
today, 11 of September 1783,

Signature of A. ROBIN 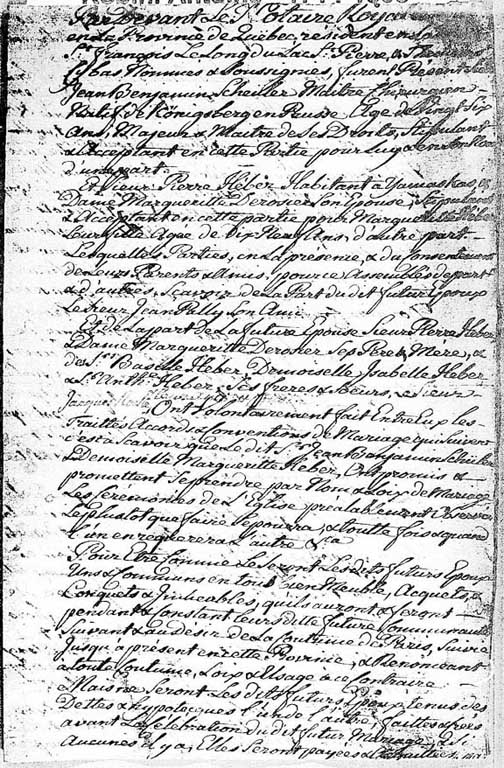 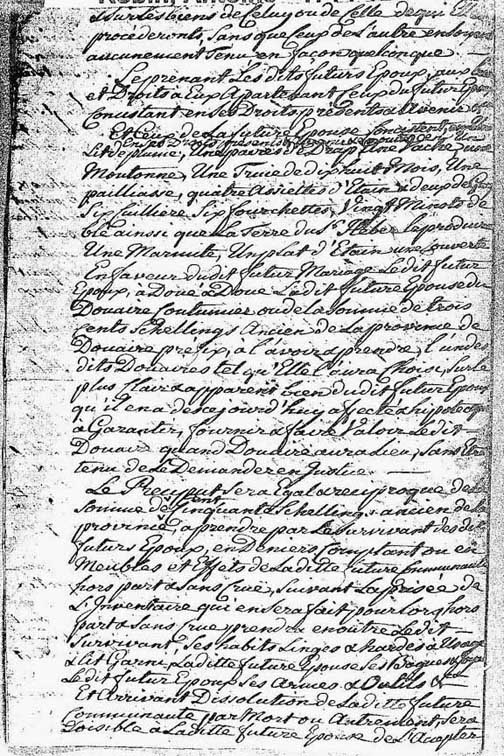 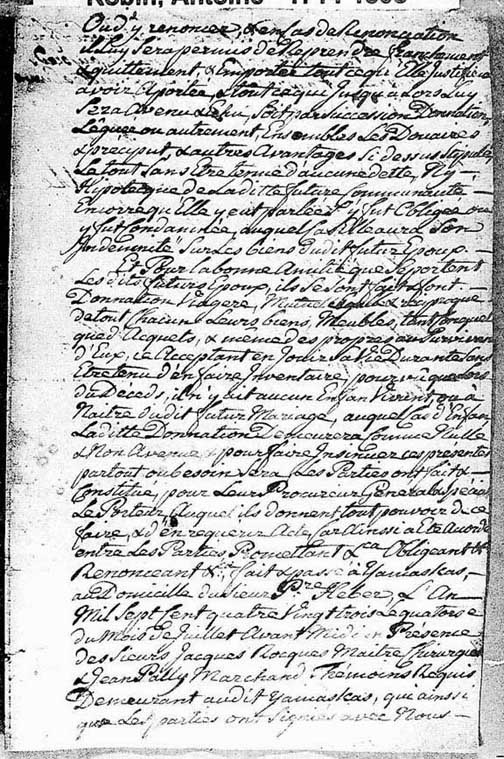 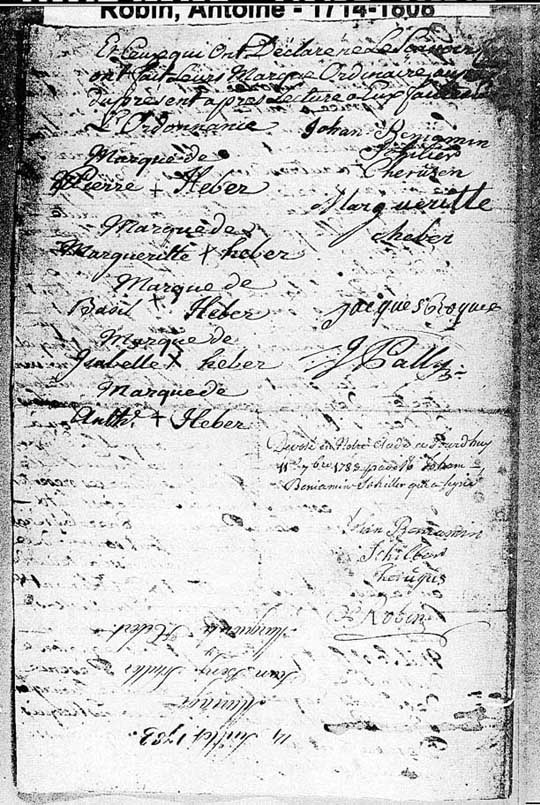 © Copyright 2002 myerchin.org, All Rights Reserved.
All contents of this site covered by registered copyrights.
COPYRIGHT by myerchin.org. ALL RIGHTS RESERVED.