Majercin to Myerchin
The Evolution of a Surname
Click on underlined names to view more pages.

In 1883, The Slovak spelling of the surname was "Majercin". In fact, even today there are Majercin relatives still living in Cemerne, Slovakia, and in the local cemetery, there are a number of Majercin grave markers.

Maria Schust Myerchin was born in Slovakia in 1844 and died January 23, 1915. She was the first of the couple to die. Her tombstone, located in Tabor, MN, is written in the Slovak language. The spelling of her surname is MAJERCIN.

John M Myerchin, Sr was born in Slovakia on June 27, 1838 and died September 4, 1916 on the Myerchin family farm near Tabor, MN. He was killed by a bull about eight months after his wife, Maria, died. His tombstone is written in English. The spelling of his surname is MAJERCHIN

Michael Myerchin, was born in Slovakia on November 1, 1873, and died April 29, 1896. Michael was a young man of 24 years when he died of consumption. His tombstone is written in English and it represents the final "Americanization" of the family name. The spelling of his surname is MYERCHIN.

Note: Both Maria and John M Myerchin died after Michael Myerchin, in 1915 and 1916. Yet, only his tombstone has the current spelling of the MYERCHIN surname. Perhaps, his stone was placed at the grave at a later date.

"Shown are three images of our trip to Prague and Cemerne, Slovakia in 2005. One of the pics depicts the graveyard in Cernerne - Jon Myerchin (Majercin) and Michael Majercin's widow who Barb and I visited. The last is the Charles River bridge with the medieval shops on it with the castle in the background. These edifices were there for the last thousand plus years etc.... I want to do this trip again - God willing!.....................Tom" 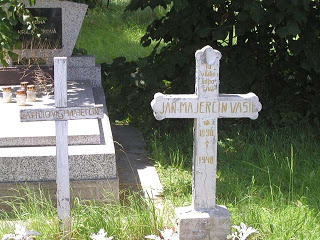 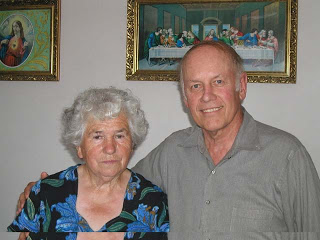 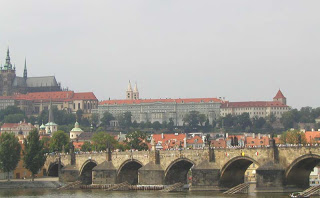 Legal Information
© Copyright 2005 myerchin.org, All Rights Reserved.
All contents of this site covered by registered copyrights.
COPYRIGHT by myerchin.org. ALL RIGHTS RESERVED.