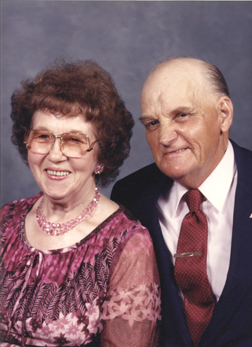 Funeral services will be held at 2 p.m. on Friday, March 14 at Our Saviors Lutheran Church in Thief River Falls with the Rev. Terry Olson officiating. Wanda Vigness will be the organist and Van Swanson will be the soloist. Casketbearers will be Joseph Myerchin, Duane Howard, Ron Howard, Gary Halvorson, Galen Halvorson and Jack Nielson. Honorary casketbearers will be Marvin's grandchildren, great-grandchildren and fellow Soo Line employees. Interment will be in Greenwood Cemetery in Thief River Falls.

On September 28, 1941, he married Regina Halvorson at her parents home. The couple made their home in Thief River Falls in 1944. Marvin worked for the Soo Line Railroad from 1944 until retiring in 1977. He then worked for 11 years as custodian at Trinity Lutheran Church. After that, Marvin and Regina enjoyed several winters in Yuma, Ariz. He was a member of Our Saviors Lutheran Church, the Sons of Norway and the Odd Fellows Lodge, all of Thief River Falls. He enjoyed fishing, playing cards and visiting with family and friends.

Marvin was preceded in death by a daughter, Marlene Kezar; his parents; a sister, Gladys Nielson; and brothers, Gust and Arlie Gustafson.

Legal Information
© Copyright 2002 myerchin.org, All Rights Reserved.
All contents of this site covered by registered copyrights.
COPYRIGHT by myerchin.org. ALL RIGHTS RESERVED.